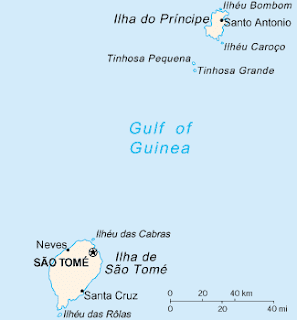 The main language is Portuguese, but there are many speakers of Forro and Angolar (Ngola), two Portuguese-based creole languages. The entire island of SÃ£o TomÃ© is a massive shield volcano which rises from the floor of the Atlantic Ocean, over 3,000Â m (10,000Â ft) below sea level. It formed along the Cameroon line, a line of volcanoes extending from Cameroon southwest into the Atlantic Ocean. Most of the lava erupted on SÃ£o TomÃ© over the last million years has been basalt. The youngest dated rock on the island is about 100,000 years old, but numerous more recent cinder cones are found on the southeast side of the island.

The higher slopes of the island are forested and form part of the Obo National Park, but agriculture is important near the north and east coasts. The chief exports are cocoa, coffee, copra, and palm products, while there is also a fishing industry.

Large reserves of oil are in the ocean between Nigeria and SÃ£o TomÃ©. The discovery has been lamented by some as endangering the nation's political stability and natural environment. In response to these concerns the government of SÃ£o TomÃ© and PrÃ­ncipe has drawn up legislation in an attempt to ensure the efficient and equitable use of oil revenues over time.

The island has a total of 63 regular bird species, plus an additional 36 vagrant and unconfirmed species. Of these, 19 are endemic and 3 near endemic; in addition, the local subspecies of Olive Ibis (Bostrychia olivacea bocagei) is endemic and considered critically endangered. Six species are considered vulnerable, and two critically endangered (SÃ£o TomÃ© Fiscal and SÃ£o TomÃ© Grosbeak).

Villages on the island include: