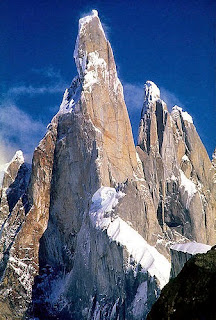 Cerro Torre is one of the mountains of the Southern Patagonian Ice Field in South America. It is located in the border between Argentina and Chile, west of Cerro ChaltÃ©n (also known as Fitz Roy). The peak is the highest in a four mountain chain: the other peaks are Torre Egger (2,685 m), Punta Herron, and Cerro Standhardt. The top of the mountain often has a mushroom of rime ice, formed by the constant strong winds, increasing the difficulty of reaching the actual summit.

Cesare Maestri claimed in 1959 that he and Toni Egger had reached the summit and that Egger had been swept to his death by an avalanche while they were descending. Maestri declared that Egger had the camera with the pictures of the summit, but this camera was never found. Inconsistencies in Maestri's account, and the lack of bolts, pitons or fixed ropes on the route, have led most mountaineers to doubt Maestri's claim. In 2005, Ermanno Salvaterra, Rolando Garibotti and Alessandro Beltrami, after many attempts by world-class Alpinists, put up a confirmed route on the face that Maestri claimed to have climbed. They did not find any evidence of previous climbing on the route described by Maestri and found the route significantly different from Maestri's description.

Maestri went back to Cerro Torre in 1970 with Ezio Alimonta, Daniele Angeli, Claudio Baldessarri, Carlo Claus and Pietro Vidi, trying a new route on the southeast face. With the aid of a gas-powered compressor drill, Maestri equipped 350 m of rock with bolts and got to the end of the rocky part of the mountain, just below the ice mushroom. Maestri claimed that "the mushroom is not part of the mountain" and did not continue to the summit. The compressor was left, tied to the last bolts, 100 m below the top. Maestri was heavily criticised for the "unfair" methods he used to climb the mountain.

The route Maestri followed is now known as the Compressor route and was climbed to the summit in 1979 by Jim Bridwell and Steve Brewer. Most parties consider the ascent complete only if they summit the often-difficult ice-rime mushroom.

The first undisputed ascent was made in 1974 by the "Ragni di Lecco" climbers Daniele Chiappa, Mario Conti, Casimiro Ferrari, and Pino Negri.

In 1977, the first Alpine style ascent was completed by Dave Carman, John Bragg and Jay Wilson (USA). They took a week to summit Cerro Torre, which had taken the Italian group two months to summit. In 1980 Bill Denz (New Zealand) attempted the first solo of the Compressor Route. Over a five-month period he made 13 concerted attempts but was driven back by storms on every occasion. On his last attempt in November 1980 he got to within 60 metres of the summit.

In January 2008, Rolando Garibotti and Colin Haley made the first complete traverse of the entire massif, climbing Aguja Standhardt, Punta Herron, Torre Egger and Cerro Torre together. They rate their route at Grade VI 5.11 A1 WI6 Mushroom Ice 6, with 2,200Â m (7,200Â ft) total vertical gain. This had been "one of the world's most iconic, unclimbed lines", first attempted by Ermanno Salvaterra.

In 2010, Austrian Climber David Lama was held responsible for around 30 new bolts and hundreds of meters of fixed rope added to the Compressor Route on the mountain (due to bad weather conditions, much of the gear was left on the mountain and later removed by local climbers). Although the bolts were drilled by Austrian guide, Heli Putz, and not by Lama himself, it was done as part of his trip sponsored by Red Bull and many climbers regard Lama and Red Bull as responsible. Many of the bolts were drilled next to cracks, which are usually used by climbers for protection on the route. This has caused a large controversy in certain climbers' circles, as his actions are unethical according to climbing purists. Although Lama was not aware of the sheer number of bolts that were drilled, he took full responsibility for the actions. In the upcoming years, he publicly regretted what happened.

On 16 January 2012, American Hayden Kennedy and Canadian Jason Kruk made a "fair-means" ascent of the controversial Compressor Route even if they actually used some of Maestri's bolts, removing many of the bolts during their descent. Colin Haley, who watched the ascent from Norwegos, estimated the climb took them thirteen hours from their bivy on the shoulder to the summit. "The speed with which they navigated virgin ground on the upper headwall is certainly testament to Hayden's great skills on rock," Colin reported. There has been much discussion concerning the removal of bolts from the compressor route by Kennedy and Kruk.

In contrast to the first free ascent of David Lama (January 2012, together with Peter Ortner), Kennedy and Kruk used bolts (although not Maestri's) during their 'fair' means ascent. Lama estimated the difficulties of his free ascent (which followed a new line cirumventing the bolt traverse and in the upper headwall) as grade X- (hard 8a but mentally highly demanding; e.g., climbing on loose flakes, long runouts). Lama stated that a free repetition of the original Compressor route is virtually impossible (particularly the rock of the last pitches comprise no climbable structures).

Cerro Torre was featured in the 1991 film Scream of Stone, directed by Werner Herzog and starring Vittorio Mezzogiorno, Hans Kammerlander, and Donald Sutherland.

Jon Krakauer, aside from the detailed recounting of the climb of the mountain in his book Eiger Dreams, mentions it briefly in Into Thin Air as one of his earlier difficult ascents (1992): "I'd scaled a frightening, mile-high spike of vertical and overhanging granite called Cerro Torre; buffeted by hundred-knot winds, plastered with frangible atmospheric rime, it was once (though no longer) thought to be the world's hardest mountain".