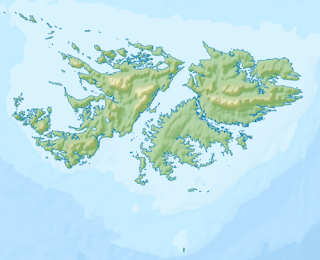 Mount Usborne Spanish: Cerro Alberdi is a mountain on East Falkland. At 705 metres (2,313Â ft) above sea level, it is the highest point in the Falkland Islands.

The mountain is referenced by Charles Darwin in Chapter 9 of the Zoology of the Voyage of the Beagle and is named after Alexander Burns Usborne, Master's Assistant on HMS Beagle, the ship that took Darwin on his famous voyage.

The remains of glacial cirques can also be seen on Mount Usborne. It is only a few metres taller than Mount Adam on West Falkland.

As one of the highest mountains of the Falklands, it experienced some glaciation. The handful of mountains over 2,000 feet (610Â m) have:

"pronounced corries with small glacial lakes at the their bases, morainic ridges deposited below the corries suggest that the glaciers and ice domes were confined to areas of maximum elevation with other parts of the islands experiencing a periglacial climate"