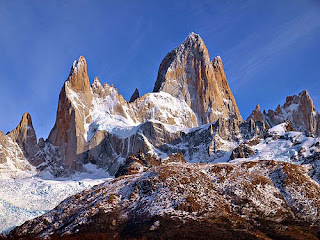 Monte Fitz Roy (also known as Cerro ChaltÃ©n, Cerro Fitz Roy, or simply Mount Fitz Roy) is a mountain located near El ChaltÃ©n village, in the Southern Patagonian Ice Field in Patagonia, on the border between Argentina and Chile. First climbed in 1952 by French alpinists Lionel Terray and Guido Magnone, it remains among the most technically challenging mountains on Earth for mountaineers.

Monte Fitz Roy is the basis for the Patagonia clothing logo following Yvon Chouinard's ascent and subsequent film in 1968.

Argentine explorer Francisco Moreno first saw the mountain on 2 March 1877. He named it Fitz Roy, in honour of Robert FitzRoy, who, as captain of the HMS Beagle had travelled up the Santa Cruz River in 1834 and charted large parts of the Patagonian coast.

Cerro is a Spanish word meaning hill, while ChaltÃ©n comes from a Tehuelche (Aonikenk) word meaning "smoking mountain", due to a cloud that usually forms around the mountain's peak. Fitz Roy, however, was only one of a number of peaks the Tehuelche called ChaltÃ©n.

It has been agreed by Argentina and Chile that their international border detours eastwards to pass over the main summit, but a large part of the border to the south of the summit, as far as Cerro MurallÃ³n, remains undefined. The mountain is the symbol of the Argentine Santa Cruz Province, which includes its representation on its coat of arms.

The mountain has a reputation of being "ultimate", despite its average height (although being the highest peak in the Los Glaciares park, it is less than half the size of the Himalayan giants), because the sheer granite faces present long stretches of arduous technical climbing. In addition, the weather in the area is exceptionally inclement and treacherous. It also attracts many photographers thanks to its otherworldly shape. The area, while still fairly inaccessible, was even more isolated until the recent development of El ChaltÃ©n village and El Calafate international airport. The mountain climb, however, remains extremely difficult and is the preserve of very experienced climbers. Today, when a hundred people may reach the summit of Mount Everest in a single day, Monte Fitz Roy might only be successfully ascended once during the span of a year.