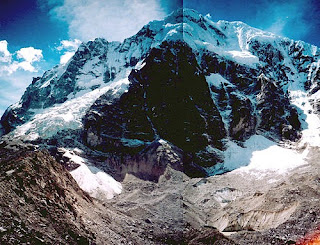 Salcantay (Nevado Salcantay) or Salkantay (Nevado Salkantay), Sallqantay in Quechua is the highest peak of the Willkapampa mountain range, part of the Peruvian Andes. It is located in the Cusco Region, about 60Â km (40Â mi) west-northwest of the city of Cusco. It is the 38th highest peak in the Andes, and the twelfth highest in Peru. However, as a range highpoint in deeply incised terrain, it is the second most topographically prominent peak in the country, after HuascarÃ¡n.

Salcantay is a large, steep peak with great vertical relief, particularly above the low valleys to the north, which are tributaries of the Amazon River.

On June 17, 2013 Nathan Heald (USA), Thomas Ryan (USA), and Luis Crispin (Peru) made the summit at 10:30am after 9 hours of climbing from a high camp at 5,500mts. on the NE ridge. This makes Crispin the first Peruvian climber to summit the mountain. The team took a reading of 6,279mts., S 13Â° 20.027â€™, W 72Â° 32.596â€™, on a GPS device. On July 31, 2013 a second team led by Nathan Heald (USA), consisting of James Lissy (USA) and Edwin Espinoza Sotelo (Peru)make the summit by the NE ridge. Due to glacial retreat, the route is now calculated to be graded D on the French adjectival scale. This makes Heald the only person to have summited the mountain twice.

The standard route on the mountain is the Northeast ridge. Accessing the route typically involves three days of travel from Cusco. The climb involves about 1,800Â m (5,900Â ft) of vertical gain, on glacier, snow, ice, and some rock.

The name Salkantay is from sallqa, a Quechua word meaning wild, uncivilized, savage, or invincible, and was recorded as early as 1583. The name is thus often translated as "Savage Mountain".

Directly to the north of Salkantay lies Machu Picchu, which is at the end of a ridge that extends down from this mountain. Viewed from Machu Picchu's main sundial, the Southern Cross is above Salkantay's summit when at its highest point in the sky during the rainy season. The Incas associated this alignment with concepts of rain and fertility, and considered Salkantay to be one of the principal deities controlling weather and fertility in the region west of Cuzco.

Salcantay's proximity to Machu Picchu makes trekking around it an attractive alternative to the oversubscribed Inca Trail. There are three possible routes starting from Mollepata. All three begin with a day of approach, heading north along a dirt road. Then they diverge: