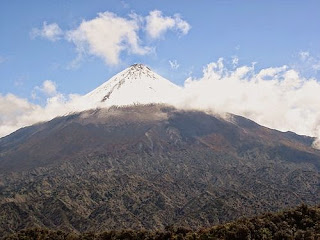 Sangay (also known as Macas, Sanagay, or Sangai) is an active stratovolcano in central Ecuador. It is the most active volcano in Ecuador, having erupted three times in recorded history. It exhibits mostly strombolian activity; the most recent eruption, which started in 1934, is still ongoing. Geologically, Sangay marks the southern boundary of the Northern Volcanic Zone, and its position straddling two major pieces of crust accounts for its high level of activity. Sangay's approximately 500,000 year-old history is one of instability; two previous versions of the mountain were destroyed in massive flank collapses, evidence of which still litters its surroundings today.

Because of its remoteness, Sangay hosts a significant biological community with fauna such as mountain tapirs, giant otters, cocks-of-the-rock, and king vultures. Since 1983, its ecological community has been protected as part of the Sangay National Park. Although climbing the mountain is hampered by its remoteness, poor weather conditions, river flooding, and the danger of falling ejecta, the volcano is regularly surmounted, a feat first achieved by Robert T. Moore in 1929. Lying at the eastern edge of the Andean cordillera, Sangay was formed by volcanic processes associated with the subduction of the Nazca Plate under the South American Plate at the Peru-Chile Trench. It is the southernmost volcano in the Northern Volcanic Zone, a subgroup of Andean volcanoes whose northern limit is Nevado del Ruiz in Colombia.

The next active volcano in the chain, Sabancaya, is in Peru, a distant 1,600Â km (990Â mi) to the south. Sangay lies above a seismogenic tectonic slab located about 130Â km (80Â mi) beneath Sabancaya, reflecting a sharp difference in the thermal character of the subducted oceanic crust, between older rock beneath southern Ecuador and Peru (dated more than 32 million years old), and younger rock under northern Ecuador and Colombia (dated less than 22 million years old). The older southern rock is more thermally stable than the northern crust, and to this is attributed the long break in volcanic activity in the Andes; Sangay occupies a position at the boundary between these two bodies, accounting for its high level of activity.

Sangay developed in three distinct phases. Its oldest edifice, formed between 500,000 and 250,000 years ago, is evidenced today by a wide scattering of material opening to the east, defined by a crest about 4,000Â m (13,120Â ft) high. This first Sangay, pockmarked by secondary ridges, is thought to have been 15â€"16Â km (9â€"10Â mi) in diameter, with a summit located 2 to 3Â km (1 to 2Â mi) southeast of the present summit. The curved shape of the remnants of this first structure indicates that it suffered a massive flank collapse, scattering the nearby forest lowlands with debris and causing a large part of its southern caldera wall to slide off the mountain, forming an embayment lower on its slopes. This 400Â m (1,312Â ft) thick block, the best preserved specimen of Sangay's early construction, consists of sequentially layered breccias, pyroclastic flows, and lahar deposits. Acidic andesites with just under 60% silicon dioxide dominate these flows, but more basic andesites can be found as well.

Sangay's second edifice began to form anew after the massive sector collapse that damaged the first, being constructed between 100,000 and 50,000 years ago. Remnants of its second structure lie within the southern and eastern parts of the debris from its first collapse; some remnants of the volcano lie to the west and north as well. Sangay's second structure is believed to have had an east-to-west elongated summit, and like its first summit structure, it suffered a catastrophic collapse that created a debris avalanche 5Â km (3Â mi) wide and up to 20Â km (12Â mi) in length. It was likely less voluminous than the volcano's first version, and its summit lay near Sangay's current one.

Sangay currently forms an almost perfect glacier-capped cone 5,230Â m (17,159Â ft) high, with a 35Â° slope and a slight northeast-southwest tilt. Its eastern flank marks the edge of the Amazon Rainforest, and its western flank is a flat plain of volcanic ash, sculpted into steep gorges up to 600Â m (1,970Â ft) deep by heavy rainfall. It has a west-east trending summit ridge, capped by three active craters and a lava dome. Sangay has been active in its current form for at least 14,000 years, and is still filling out the area left bare by its earlier incarnations, being smaller than either of them. Uniquely, in its 500,000 years of activity, its magma plume has never changed composition or moved a significant distance.

Eruptions at Sangay exhibit strombolian activity, producing ashfall, lava flows, pyroclastic flows, and lahars. All known eruptions at the volcano have had a Volcanic Explosivity Index (VEI) of 3. Despite its activity, Sangay is located in a remote, uninhabited region; only a large Plinian eruption could threaten occupied areas 30â€"100Â km (19â€"62Â mi) to its west. Nonetheless, a flank collapse on its eastern side, possible given the volcano's construction and history, could displace nearby forest and possibly affect settlements. Access to the volcano is difficult, as its current eruptive states constantly peppers the massif with molten rock and other ejecta. For these reasons, it is not nearly as well-studied as other, similarly active volcanoes in the Andes and elsewhere; the first detailed study of the volcano was not published until 1999. Sangay is one of two active volcanoes located within the namesake Sangay National Park, the other being Tungurahua to the north. As such it has been listed as a UNESCO World Heritage Site since 1983. The area's isolation has allowed it to maintain a pristine ecology relatively untouched by human interaction, and the park hosts a biome ranging from alpine glaciers on the volcanoes' peaks to tropical forest on their flanks. Altitude and rainfall are the most significant local factors affecting fauna, and therefore the most lush ecosystems are found on the wetter parts of the volcano's eastern slope.

Sangay can and has been climbed. It was first ascended in 1929 by Robert T. Moore, prior to its current eruption beginning in 1934. However, the volcano's current active state presents dangers to mountaineers in the form of falling ejecta; in 1976, two members of an expedition on the volcano were stuck and killed by falling debris. In addition, the volcano is located in a remote region with poor roads and is difficult to access, and periods of heavy rainfall can flood rivers and cause landslides, rendering the mountain routes impassable. Nonetheless, the Instituto Ecuatoriano Forestal y de Areas Naturales, which maintains an office near the mountain, facilitate such activities by providing local guides and rooms for rent for visitors. Ascension takes between 7 and 10 days from Quito. Conditions on the volcano are usually very wet and foggy, and mountaineers may be visually impaired from viewing the volcano as they ascend it.